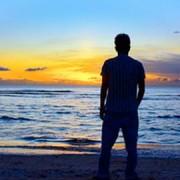 The civilian lives in a world that edifies mediocrity.  He spends his time playing computer games and when he looses, he just hits replay to try again.  He watches TV where the person dies and next week guess what, he is back on the screen again.  Instead of taking personal responsibility, he looks to blame others, society or the government for his problems.

The warrior, on the other hand, understands the concept of one encounter one chance.  He knows that in a life and death encounter there is no second place.  He never takes these things lightly, and would never engage in a situation where he is not assured victory.  He believes in the saying, “If it is to be, it is up to me.”

He constantly strives to increase his abilities and his understanding of the obstacles around him.  He believes there is truth to the statement that you are either getting better or your getting worse all the time, and therefore works everyday to improve mentally, physically and spiritually.  This concept is not trying to be better than someone else, only that you are improving a little everyday.

Kaizen is the Japanese word for constant and never ending improvement. In our quest for black belt excellence, there is no time off.  This is a 24/7 endeavor.  If you witness senior students and instructors they are always working on improving their mind, body and spirit.  Winners feel they are destined for success and are constantly trying to grow and prepare for that goal.  Successful people constantly read and listen to positive and inspirational books and tapes.  They know that by reading 30 minutes everyday, within a few years they will be in the top 10% of their chosen field. In the dojo, they give it all they have every class, forging their spirit and attitude.

The Chinese say that a journey of 1000 miles begins with one step.  Kaizen is all about making that step towards improvement, everyday – in every way. 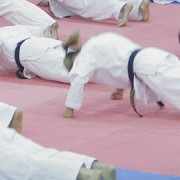 When I began learning karate I didn’t understand why we did things like push-ups and crunches. Wasn’t this karate class? Shouldn’t the whole workout consist of karate moves?

I didn’t get it! I knew my fitness was poor, but really – how much physical fitness could it take to do front chokes? Or that single kata we were learning?

Well, time passed. The more familiar we became with the moves, the more material we learned and the more difficult that material was. Classes moved faster because we had more things to cover in that hour. Renshi introduced circuits; I hated them! (Took awhile to change my mind on those. Jump over to Circuit Convert!) Naturally our fitness improved, but it still took quite awhile for me to understand why it was important. Yes, I know – I’m slow sometimes.

What did I figure out?

Stamina to stay on the floor for all the kata? Conditioning.

It takes strength, speed and stamina to practice karate correctly. The more tired you are, the messier your karate will be. In order to get the most out of classes, conditioning is vital.  That’s not to say you need to be an Olympic-caliber athlete; it would help, but I don’t know anyone who’s at that level.

If you’re not in great condition, don’t stress about it. Do what you can, and make it a goal to improve your conditioning from week to week. Break a sweat in class! Work hard so when you walk off the mat, you know you’ve done your best.

Two hours a week in class is not enough if you’re trying to ramp up. On non-class days, work on your kata and basics, walk, swim, paddleboard, bike, lift weights, do aerobics or ballet. It doesn’t matter what you do – but do something! The effort you put forth now will pay off in the long run. 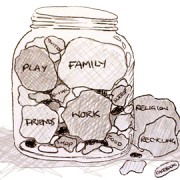 I came across this story, yet I’ve heard variations of it before. It is a good reminder to us all as we set our goals for 2015. Enjoy.

A professor stood before his philosophy class and had some items in front of him. When the class began, he wordlessly picked up a very large and empty mayonnaise jar and proceeded to fill it with large rocks. He then asked the students if the jar was full. They agreed that it was.

‘Now,’ said the professor as the laughter subsided, ‘I want you to recognize that this jar represents your life. The large rocks are the important things — your family, your children, your health, your friends and your favorite passions — and if everything else was lost and only they remained, your life would still be full. The pebbles are the other things that matter like your job, your house and your car. The sand is everything else — the small stuff.

‘If you put the sand into the jar first,’ he continued, ‘there is no room for the pebbles or the rocks. The same goes for life.

If you spend all your time and energy on the small stuff you will never have room for the things that are important to you.

Pay attention to the things that are critical to your happiness.

Take care of the large rocks first — the things that really matter. Set your priorities. The rest is just sand.

One of the students raised her hand and inquired what the Beer represented. The professor smiled and said, ‘I’m glad you asked.’ The Beer just shows you that no matter how full your life may seem, there’s always room for a couple of Beers with a friend.